Noirmoutier Island and the salt marshes

The salt marshes first appeared on the island of Noirmoutier in the Middle Ages, following titanic work carried out by the peasants. At that time, salt was essential for food but also for the preservation of food, its marketing by waterway extended over the territory through rivers, and as far as the Baltic Sea. Artisanal salt was so necessary and so precious that it was called white gold.

Today’s Sauniers are the heirs of more than a thousand years of history and tradition.

We are a couple of artisanal sea salt producers on the island of Noirmoutier, in Vendée. We work independently for the marketing of our harvest. Our salt marsh includes 40 harvesting ponds, called “oeillet”. It is in these « œillets » that we will collect on average 40 tonnes of coarse salt and 2 tonnes of fleur de sel. During the summer season, we are fortunate to be able to share our passion with 2 seasonal workers who will help us with packaging, harvesting and welcoming the public.

The coarse salt and the fleur de sel from the Marais Mounet are harvested manually and carefully by the salt maker.

Build a project around an ancestral trade, dependent on natural elements, and where the farmer keeps control of all stages of the life of his product to the consumer.

Through short-circuit sales, we want to make the wealth of artisanal salt accessible to as many people as possible, while guaranteeing remuneration that allows producers to make a decent living from their trade.

Method of operating the salt marsh

Four Conditions are essential for a salt marsh to produce sea salt:

The evaporation of seawater, under the combined effect of the sun and the wind, allows the appearance of precious crystals in our clay basins.

The Saunier then comes into action to harvest this white gold offered by nature. 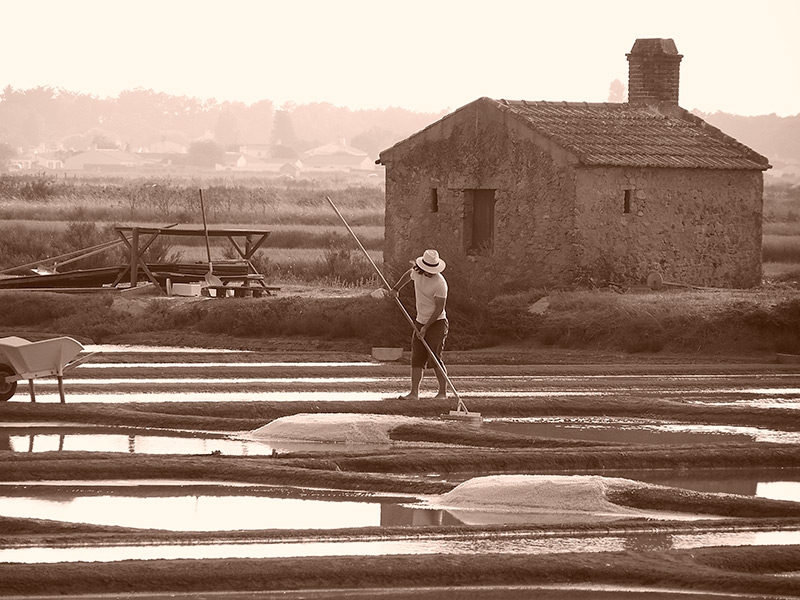 The role of the salt worker

The weather conditions the harvest season, the salt worker must adjust the levels so that there is always 5cm depth of water in each basin of the marsh. It will close the circulation of water when the rain arrives, it will favor it on days of strong evaporation.

The rest of the year is devoted to different tasks: